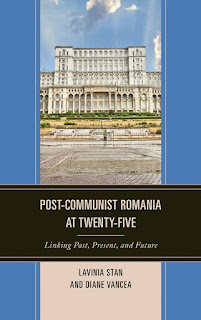 “A comprehensive view of Romania 25 years after the collapse of Ceausescu’s regime is presented in this collection edited by Stan and Vancea. The book is organized into four parts. In the first part, contributors take note of the period immediately following the removal of Ceausescu, including letters from Romanian citizens in the 1989–1990 period detailing fears and hopes for Romania’s future. The second part takes on issues of identity, political participation, and the media, and the third part focuses on political issues such as representation, parties, and political institutions.

The influence of the EU on Romanian human rights and environmental measures is considered in the final part of the book. The chapters present first-rate scholarship from some of the most well-known experts in this area and a great deal of methodological diversity as well. The diversity in methods and content is a definitive strength of the book. Marius Stan and Vladimir Tismaneanu’s chapter on coming to terms with the communist past stands out. Though the focus of the book is on Romania, much is applicable to the other post-Communist countries in the region. Summing Up: Highly recommended. Graduate and research collections. (CHOICE)”
More details about book here.
Publicat de Cosmin Budeanca la 15.2.16