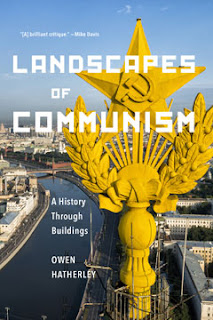 „When communism took power in Eastern Europe, it remade cities in its own image, transforming everyday life and creating sweeping boulevards and vast, epic housing estates in an emphatic declaration of a noncapitalist idea. The regimes that built them are now dead and long gone, but from Warsaw to Berlin, Moscow to postrevolutionary Kiev, the buildings remain, often populated by people whose lives were scattered by the collapse of communism.

Landscapes of Communism is a journey of historical discovery, plunging us into the lost world of socialist architecture. Owen Hatherley, a brilliant and witty young urban critic, shows how power was wielded in these societies by tracing the sharp, sudden zigzags of official communist architectural style: the superstitious, despotic rococo of high Stalinism, with its jingoistic memorials, palaces, and secret policemen’s castles; East Germany’s obsession with prefabricated concrete panels; and the metro systems of Moscow and Prague, a spectacular vindication of public space that went further than any avant-garde ever dared. Throughout his journeys across the former Soviet empire, Hatherley asks what, if anything, can be reclaimed from the ruins of communism—what residue can inform our contemporary ideas of urban life?”
More details about book here.