The international conference: The ‘state artist’ in Romania and Eastern Europe - 5 November 2016 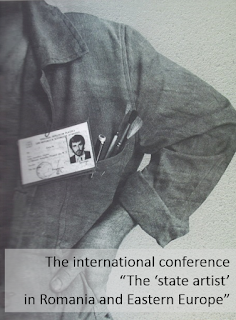 „The establishment of communist regimes in Eastern Europe signified for the visual arts, the consolidation of the “state artist”. Artworks were commissioned by the state, which offered extensive rewards to artists, who were also forced to comply with the political and ideological rigors of the new regime.

The presentations included in this conference program try to explore the different transformations that the artists underwent in order to comply with the extensive role assumed by the communist state in the artistic field with a specific focus on the visual arts, and the Union of Visual Artists (Uniunea Artiștilor Plastici, UAP). The conference aims to discuss the state artist in the context of communist regimes from multiple points of views.
The topics discussed are: How was the new artist shaped by the communist regimes? Were artists able to integrate Socialist Realism as a mandatory style? If not, which were the limits of this mandatory style or the national specificities? Which were the types of resistance to the model of the state artist? How did Socialist Realism translate in different visual practices? What role did the Union of Visual Artists of Romania play? How does it compare to other unions in the East? What are the transformations of the unions of artists after 1990? The presentations will situate the Romanian case in a regional perspective, and provide a comparative overview of the situation in South-Eastern Europe and the Soviet Union. Furthermore, the presentations deal with other artistic expressions besides the visual arts, such as theater, cinema, literature or architecture.”
More details and the program of the conference here.
Publicat de Cosmin Budeanca la 3.11.16