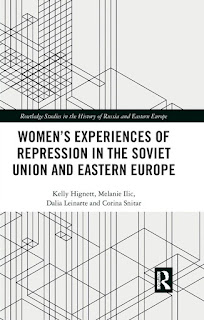 “Based on extensive original research, including studies of autobiographies and biographies, reminiscences and memoirs, archived oral history data and interviews conducted by the authors, this book provides a rich picture of how women experienced repression in the former Soviet bloc.

Although focusing on key years when repression was at its height – 1937 for the Soviet Union, 1941 for Lithuania and Poland, 1948 for Czechoslovakia and 1956 for Romania – the book ranges more widely. It demonstrates that although far fewer women than men were the direct victims of repression, women experienced severe repression in many ways, including exile, deportation and as family members of those arrested, imprisoned and executed.”
More details here.
Publicat de Cosmin Budeanca la 31.10.17