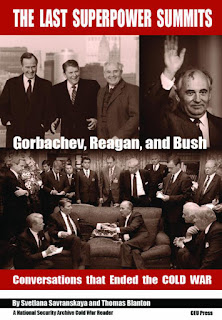 „This book publishes for the first time in print every word the American and Soviet leaders – Ronald Reagan, Mikhail Gorbachev, and George H.W. Bush – said to each other in their superpower summits from 1985 to 1991. Obtained by the authors through the Freedom of Information Act in the U.S., from the Gorbachev Foundation and the State Archive of the Russian Federation in Moscow, and from the personal donation of Anatoly Chernyaev, these previously Top Secret verbatim transcripts combine with key declassified preparatory and after-action documents from both sides to create a unique interactive documentary record of these historic highest-level talks – the conversations that ended the Cold War.


The summits fueled a process of learning on both sides, as the authors argue in contextual essays on each summit and detailed headnotes on each document. Geneva 1985 and Reykjavik 1986 reduced Moscow’s sense of threat and unleashed Reagan’s inner abolitionist. Malta 1989 and Washington 1990 helped dampen any superpower sparks that might have flown in a time of revolutionary change in Eastern Europe, set off by Gorbachev and by Eastern Europeans (Solidarity, dissidents, reform Communists). The high level and scope of the dialogue between these world leaders was unprecedented, and is likely never to be repeated.”
More details about book here.
Publicat de Cosmin Budeanca la 15.12.17