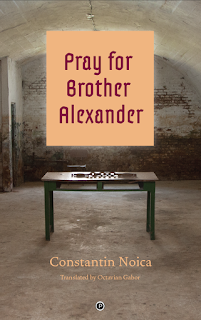 "Constantin Noica’s (1909-1987) Pray for Brother Alexander is a meditation on responsibility, freedom, and forgiveness. On the surface, the book describes events and people from Noica’s life during his time in a political communist prison in Romania.


However, the volume is not a historical account only, but rather an honest introspection into how a human being may keep sanity when everything around him makes no sense.
Unlike his famous Romanian contemporaries, scholar Mircea Eliade, dramatist Eugène Ionescu, and philosopher Emil Cioran, who lived abroad, Constantin Noica did not leave communist Romania. Considered an “anti-revolutionary” thinker, Noica was placed under house arrest in Câmpulung-Muscel between 1949 and 1958. In 1958, he was sentenced to 25 years in prison. He was released after 6 years, and Pray for Brother Alexander covers his experiences during this time. In his writings, Noica rekindles universal themes of philosophy, but he deals with them in a profoundly original manner, based on the culture in which he lived and for which he also suffered persecution.
The volume will be of great of interest to scholars and students in history of philosophy and continental philosophy, but also to people interested in the recent history of Eastern Europe and the political persecution that took place after WWII in those countries."
The book was translated by Octavian Gabor. More details about book here.