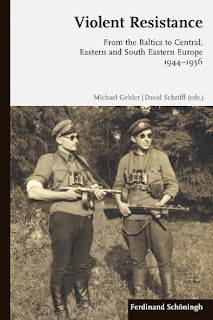 Three chapters of the book are about Romania: The Armed Anti-communist resistance in North-Western Romania. Causes, Evolution, Consequences, and the Role of the Families and Local Communities (Cosmin Budeancă); Spectres of Fascism: Anti-communist Resistance and The Legacy of the Legion of the Archangel Michael in 1940s Romania (Roland Clark); Women in the Armed Anti-communist Romanian Resistance, between Loyalty, Support and Betrayal. Case Studies: Banat and Nucșoara Areas (Ioana Ursu).

The end of the Second World war did not mean the end of violence for many regions in Eastern Europe. The establishment of Communist-led governments often met not only civil but also armed resistance. These actions were taken by partisan groups and paramilitary forces which in some cases had been formed already during the war to support axis forces. In other cases – like Poland’s Armia Krajowa – they fought Nazi and Soviet occupiers with the same fervour. The aims of the ﬁghters were the end of Communist rule and – like in the Baltic region – independence from the Soviet Union. Diﬃculties in accessing sources and research taboos as well as a focus on other aspects of the Cold War are reasons why violent resistance in Europe after the Second World War is a topic yet rather underestimated and comparably little investigated by historiography. This book gives a comprehensive ﬁrst overview of the ultimately futile attempts to end the rule of Moscow and her proxies.