Religion and Politics in Post-Socialist Central and Southeastern Europe. Challenges since 1989, Edited By Sabrina P. Ramet 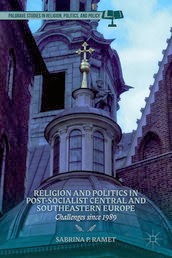 Since the crash of communism in Central and Southeastern Europe in 1989, almost everything in the region has changed – from politics to economics to popular culture to religion. There have been new challenges to confront and new dilemmas. This volume examines the political engagement of religious associations in the post-socialist countries of Central and Southeastern Europe, with a focus on disputes about property restitution, revelations about the collaboration of clergy with the communist-era secret police, intolerance, and controversies about the inclusion of religious instruction in the schools. Each of the countries in the region is analyzed with research grounded in on-site interviews, as well as extensive use of literature in local and Western languages.
Table of contents:

3. The Catholic Church in the post-1989 Czech Republic and Slovakia; Milan Reban

4. The Kádár Regime and the Roman Catholic Hierarchy; Krisztián Ungváry

5. The Catholic Church and politics in Slovenia; Egon Pelikan

7. The Cross, the Crescent and the Bosnian War: The Legacy of Religious Involvement; Janine Natalya Clark

8. Religion and Democracy in Serbia since 1989: The Case of the Serbian Orthodox Church; Radmila Radic & Milan Vukomanovic

9. Islam and Politics in the Serbian Sandžak: Institutionalisation and feuds; Aleksander Zdravkovski

11. The Orthodox Churches and Democratization in Romania and Bulgaria; Lavinia Stan & Lucian Turcescu

About Sabrina P. Ramet:
Sabrina P. Ramet is a Professor of Political Science at the Norwegian University of Science and Technology. She was educated at Stanford University, the University of Arkansas, and UCLA, receiving her Ph.D. from UCLA in 1981. She is the author of 12 scholarly books (three of which have been published in Croatian translations) and editor or co-editor of 28 previous books. Her books have also been published in French, German, Italian, and Serbian translations. Among her previous books is Civic and Uncivic Values in Macedonia: Value Transformation, Education, and Media, edited with Ola Listhaug and Albert Simkus (Palgrave Macmillan, 2013).
The book was printed by Palgrave Studies in Religion, Politics, and Policy
Information from here.
Publicat de Cosmin Budeanca la 6.3.14