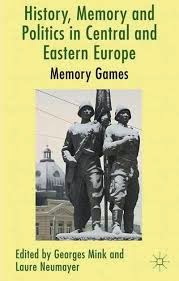 Part I:   Mobilizations around Memory: New Actors, New Issues
1.  Cécile Jouhanneau:  Would-be Guardians of Memory: An Association of Camp Inmates of the 1992–95 Bosnian War under Ethnographic Scrutiny
2.  Kathy Rousselet:  The Russian Orthodox Church and Reconciliation with the Soviet Past
3.  Machteld Venken:  ‘You Still Live Far from the Motherland, but You Are Her Son, Her Daughter.’ War Memory and Soviet Mental Space (1945–2011)
4.  Eva Fisli and Jocelyn Parot:  Pilgrimages to the Edge of the Fallen Empire – An Anthropological Study of Finnish and Hungarian Pilgrimages to Second World War Memorials in Post-Soviet Russia
5.  Sarah Fainbergv:  Memory at the Margins: The Shoah in Ukraine (1991–2011)

Part II:   Memory Policies and Historical Narratives: How Do States Deal with Memories of the Past?
6.  Irmina Matonyte:  The Elites’ Games in the Field of Memory: Insights from Lithuania
7.  Tatiana Kasperski:  The Chernobyl Nuclear Accident and Identity Strategies in Belarus
8.  Filipa Raimundo:  Dealing with the Past in Central and Southern European Democracies: Comparing Spain and Poland
9.  Georges Mink:  Institutions of National Memory in Post-Communist Europe: From Transitional Justice to Political Uses of Biographies (1989–2010)

Part III:   International Norms and ‘Geopolitics of Memory’
10.  Tatiana Zhurzhenko:  Memory Wars and Reconciliation in the Ukrainian–Polish Borderlands: Geopolitics of Memory from a Local Perspective
11.  Pascal Bonnard:  Memory of the Soviet Union and European Norms on Diversity as Rival Frameworks for Ethnic Boundary Making: A Case Study in Latvia’s Russian-speaking Schools
12.  Laure Neumayer:  Symbolic Policies versus European Reconciliation: The Hungarian ‘Status Law’
13.  Guillaume Mouralis:  The Rejection of International Criminal Law in West Germany after the Second World War
14.  Philippe Perchoc:  History as a Tool for Foreign Policy in the Baltic States after Independence
Conclusion by Georges Mink and Laure Neumayer