New book: Juliane Fürst, Josie McLellan (eds.), Dropping out of Socialism. The Creation of Alternative Spheres in the Soviet Bloc 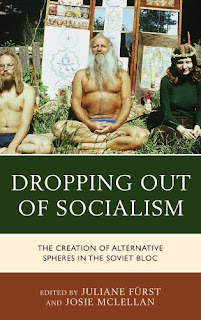 „The essays in this collection make up the first study of «dropping out» of late state socialism in Eastern Europe and the Soviet Union. From Leningrad intellectuals and Berlin squatters to Bosnian Muslim madrassa students and Romanian yogis, groups and individuals across the Eastern Bloc rejected mainstream socialist culture. In the process, multiple drop-out cultures were created, with their own spaces, music, values, style, slang, ideology and networks. Under socialism, this phenomenon was little-known outside the socialist sphere.
Only very recently has it been possible to reconstruct it through archival work, oral histories and memoirs. Such a diverse set of subcultures demands a multi-disciplinary approach: the essays in this volume are written by historians, anthropologists and scholars of literature, cultural and gender studies. The history of these movements not only shows us a side of state socialist life that was barely known in the west. It also sheds new light on the demise and eventual collapse of late socialism, and raises important questions about the similarities and differences between Eastern and Western subcultures.”
More details and the content of book here.