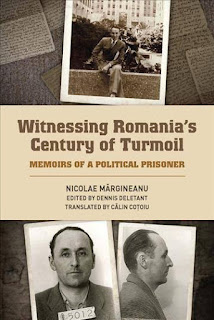 Combining the intimacy of memoir and the precision of history, the story of psychologist Nicolae Margineanu's imprisonment and survival conveys in striking detail the corrosive impact of Communist rule in Romania.


Nicolae Margineanu's journey started in 1905 in the village of Obreja in Transylvania and ended in 1980 in Cluj-Napoca, Romania. He began his life under Austro-Hungarian rule, was witness to the 1918 Union, lived under three kings (Ferdinand, Carol II, and Mihai), and survived all of Romania's dictatorships, from absolute monarchy to the Legionnaires' rebellion, the Antonescian dictatorship, and finally the years under Communist rule. Margineanu studied psychology at the University of Cluj and attended postgraduate courses in Leipzig, Berlin, Hamburg, Paris, and London. He was awarded a Rockefeller Foundation fellowship that enabled him to do research for two years in the United States, at Harvard, Yale, Columbia, the University of Chicago, and Duke. He returned to Romania and became chair of the psychology department at the University of Cluj.
In 1948, Margineanu was arrested on a charge of "high treason," based on his alleged membership in a resistance movement against Communist rule. He was sentenced to twenty-five years' imprisonment, of which he served sixteen, passing through the jails at Malmaison, Jilava, Pitesti, Aiud, and Gherla. This book, his autobiography, is a shocking testimony to the fate of the intellectual elite of Romania during the Communist dictatorship. It is a unique and invaluable addition to the literature in English on the experience of political prisoners, not only in Communist Romania but in authoritarian states in general.
Nicolae Margineanu (1905-1980) was a Romanian psychologist and writer who was a political prisoner during the period of Communist rule. Dennis Deletant is the Visiting Ratiu Professor of Romanian Studies at Georgetown University. Calin Cotoiu is a translator based in Bucharest, Romania.
The book was translated by Calin Cotoiu and edited by Dennis Deletant.
More details on the website of Boydell & Brewer.
Publicat de Cosmin Budeanca la 26.6.19