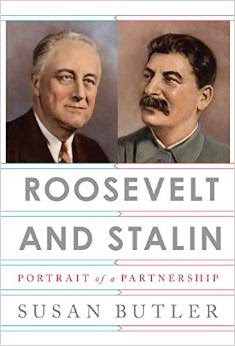 „Franklin Roosevelt’s relationship with Joseph Stalin has been well plumbed by historians, but Butler brings intimacy and texture to the topic. She tells the familiar story of what happened at the Tehran conference in 1943 and at the Yalta conference in 1945, as the two men argued over Allied strategy in World War II and tensions mounted over planning for the postwar period. Butler uses details – the furnishings in a room, the leaders’ asides to their aides, their body language, and their quirks and passions – to offer a sense of what it was like to be in Roosevelt and Stalin’s presence and witness their exchanges. She also explores Roosevelt’s deep but often manipulative relationship with the third main character in the story, Winston Churchill. And she puts special emphasis on Roosevelt’s near-obsessive commitment to the establishment of the UN and his determination to preserve cooperation with the Soviet Union after the war. Other historians might quarrel with the degree to which Butler focuses on those matters, but few will deny the pleasure her book provides.”
Information from Foreign Affairs.
More details here.
Publicat de Cosmin Budeanca la 15.3.15