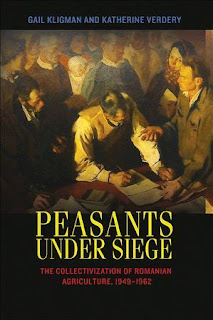 
Collectivization not only overturned property relations, the authors argue, but was crucial in creating the Party-state that emerged, its mechanisms of rule, and the "new persons" that were its subjects. The book explores how ill-prepared cadres, themselves unconvinced of collectivization's promises, implemented technologies and pedagogies imported from the Soviet Union through actions that contributed to the excessive use of force, which Party leaders were often unable to control. In addition, the authors show how local responses to the Party's initiatives compelled the regime to modify its plans and negotiate outcomes.
Drawing on archival documents, oral histories, and ethnographic data, Peasants under Siege sheds new light on collectivization in the Soviet era and on the complex tensions underlying and constraining political authority.
Gail Kligman is professor of sociology and director of the Center for European and Eurasian Studies at the University of California, Los Angeles. Katherine Verdery is the Julien J. Studley Faculty Scholar and Distinguished Professor of Anthropology at the City University of New York Graduate Center.
Endorsements:
"Peasants under Siege is the most nuanced and multifaceted analysis of this topic to date. It will become an instant classic in East European studies. Kligman and Verdery never take the easy way out or smooth over complexity. Their empirical account of Romanian collectivization offers unparalleled detail about the lived realities of village life in early state socialism. This book was a pleasure to read."--Lynne Haney, New York University
"This is the most comprehensive, theoretically sophisticated, and penetrating work on the collectivization of agriculture in Romania available in any language. The authors cover collectivization from every important angle and with much originality, and they provide a broad framework from which to judge the causes behind collectivization and the methods used to carry it out. I read this book with much profit and pleasure."--Keith Hitchins, University of Illinois, Urbana-Champaign
Table of Contents:
Aflați mai multe »
Publicat de Cosmin Budeanca la 11.9.11 Niciun comentariu: